Finally, something in writing from the CSLB that explains the B General Experience requirements. 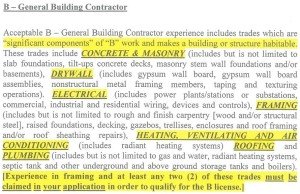 And there is nothing in the law that backs this up!

What you see here was sent to a client of mine from Indiana. The highlighting was done by the Contractors State License Board application technician.

The bottom two lines clearly state [Experience in framing and at least any two…], but there is nothing in any law or regulation that states this. Now it’s always been this way, it was this way when I worked at the CSLB from 2001 to 2005, but just because it’s been this way for a long time doesn’t make it right. This is a CSLB underground reg that needs to be corrected and/or stopped!

(a) Except as provided in this section, a general building contractor is a contractor whose principal contracting business is in connection with any structure built, being built, or to be built, for the support, shelter, and enclosure of persons, animals, chattels, or movable property of any kind, requiring in its construction the use of at least two unrelated building trades or crafts, or to do or superintend the whole or any part thereof.

This does not include anyone who merely furnishes materials or supplies under Section 7045 without fabricating them into, or consuming them in the performance of, the work of the general building contractor.