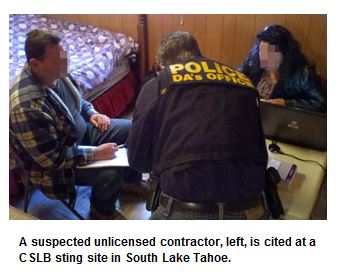 The Contractors State License Board (CSLB) states that unlicensed contracting is part of California’s estimated annual $60 to $140 billion dollar underground economy. These individuals and businesses do not pay taxes, have general liability insurance or license surety bonds. The CSLB also believes that it is not unusual for them to be involved in other illegal activities as well.

What can you do if believe that an individual or business is contracting without a license? And can I report unlicensed activity?

What is illegal contractor activity?

What should you do if you know that an individual or business is using someone else’s license number illegally?

What happens if you don’t renew you license on time?

You will be considered unlicensed until your renewal is processed. During this period you may not enter into any new contracts.

How does CSLB process complaints against unlicensed contractors?

When the Board receives a complaint against an unlicensed contractor, it may issue an administrative citation or file a criminal action with the local district attorney’s office. In some cases, it may initiate injunction proceedings against the non-licensee through the Office of the Attorney General or the district attorney.

The Registrar may issue a citation to an unlicensed contractor when there is probable cause to believe that the person is acting in the capacity of a contractor or engaging in the business of contracting without a license that is in good standing with CSLB. The citation includes an order of abatement to cease and desist and a civil penalty of up to $15,000. Unless the board receives a written appeal within fifteen (15) working days after the citation is served, the citation becomes a final order of the Registrar. The civil penalty is paid to CSLB.

If the citation is appealed, a mandatory settlement conference may be held to resolve the citation. If the matter is not settled, the appeal will be heard before an administrative law judge. The administrative law judge submits a decision to uphold, modify, or dismiss the citation. The decision is sent to the Registrar for adoption. If the cited unlicensed contractor continues to contract without a license, the Registrar may refer the case to the local district attorney for criminal action.

CSLB may refer investigations to the local prosecutor to file criminal charges. If criminal charges are filed, the unlicensed contractor appears in local court, which renders a final decision on the case. The court may order a fine, probation, restitution, a jail sentence, or all of these.

The Registrar may apply for an injunction with the superior court of either the county in which an alleged practice or transaction took place or the county in which the unlicensed person maintains a business or residence. An injunction restrains an unlicensed person from acting in the capacity or engaging in the business of contracting without a license that is in good standing with CSLB.

If you are unlicensed and need help with your application or you need study materials, the License Guru is here to help.