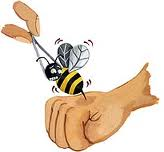 Could the CSLB be adding to the unlicensed activity taking place because of their new application processes?

SACRAMENTO — An apartment complex about one mile from the famous Santa Monica Pier served as the backdrop for an undercover sting operation conducted Thursday, September 26, 2013, by the Contractors State License Board’s (CSLB) Statewide Investigative Fraud Team) (SWIFT). The operation resulted in eight people receiving Notices to Appear (NTA) in court to answer a variety of misdemeanor charges. Seven of the eight gave bids for painting.