It’s good to see the Contractors State License Board (CSLB) getting out and doing these stings. There were several of them that were bidding as B-General Building Contractors. I wonder if any of them have looked into, or attempted to get their license but couldn’t because of the new application processing procedures. And this could be a sign that the underground economy is expanding. 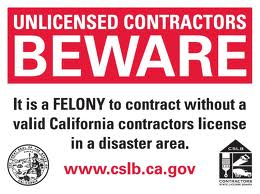 – A stormy day didn’t deter unlicensed contractors from converging on a Hayward home to bid for construction work during a Contractors State License Board CSLB undercover sting operation on November 20, 2013, carried out with the assistance of the Alameda County District Attorney’s Office. Nine suspects were issued Notices to Appear NTAs in Superior Court on charges of contracting without a license and false advertising.

Investigators from CSLB’s Statewide Investigative Fraud Team SWIFT posed as homeowners at the single-family home and fielded a multitude of offers to do work that included electrical, plumbing, fencing and flooring projects. It wasn’t difficult for CSLB investigators to identify those who might be illegally contracting in the area simply by checking online bulletin boards such as craigslist, business cards or flyers posted at hardware stores, and local publications, including Penny Saver.

Nine of the 10 people who showed up to give a bidwere cited. All nine face misdemeanor charges for both contracting without a license Business and Professions Code section 7028, which carries a penalty of up to six months in jail and/or a fine of up to $5,000 if convicted, and illegal advertising Business and Professions Code section 7027.1. State law requires contractors to place their license number in all print, broadcast, and online advertisements. Those without a license can advertise to perform jobs valued at less than $500, but the ad must state that they are not a licensed contractor. The penalty is a fine of $700 to $1,000.

The lone person who did not bid had a good reason – he had been cited for illegal contracting during a CSLB sting in July and avoided getting caught again.

“It doesn’t matter what the conditions – rain, cold, or even after a natural disaster – unlicensed contractors always seem to come out of the woodwork,” said CSLB Registrar Steve Sands. “And they come to take advantage of a situation, no matter if they’re qualified or not to do the job.